Singing Dragon speaks to Noah Karrasch, author of the brand new book, The Self-Care Guide to Surgery – a guide for people who have undergone (or who are about to undergo) surgery and what to do to aid recovery.

In the interview, we speak about preventing surgery and why we should be thinking about posture. Noah shares bodywork techniques to help our daily lives and advice for those facing imminent procedure.

Noah Karrasch is a licensed deep tissue massage therapist and holds a teaching degree from the University of Missouri, Columbia. He teaches CORE bodywork skills around the world. He is also author of: ‘BodyMindCORE Work for the Movement Therapist’, ‘Meet Your Body’, ‘Getting Better at Getting People Better’, and ‘Freeing Emotions and Energy Through Myofascial Release’.

END_OF_DOCUMENT_TOKEN_TO_BE_REPLACED 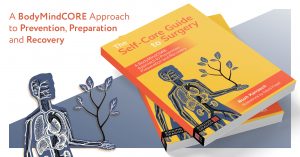 Mindful Movement, Where You Are

Most of us make those New Year’s resolutions: I’ll lose fifteen pounds, I’ll work out regularly, I’ll settle the old score, I’ll make more money, etc., etc. Too many of us don’t seem to get those resolutions to resolve into something new and better. In my head, one of the reasons for that is we set goals too ambitious, instead of setting smaller and more achievable ones. To that end, I’d like you to think about your expenditure of energy in terms of movement during the day. It seems to me that most of us don’t move nearly enough, and that when we finally do move we effort a bit too much in our desire to fix everything quickly. Neither of these ‘fixes’ will fix anything, and in fact, just may make things worse.

Let’s start with that second idea first: it’s a new year, and we’re going to trim off the fifteen holiday (or before) pounds, then we’re going to get the new wardrobe, then the new job, etc., etc. We set very lofty goals, then stop fairly quickly when we feel defeated by the goals we’ve set, and we begin to feel like a failure. How to change this? It’s simple, really. We merely set smaller and more achievable goals instead of lofty grand ones. Instead of forcing ourselves to lose fifteen pounds, why not focus on eating a bit healthier with more of the good foods – vegetables, fruits, fiber and more water in the diet? Without going kamikaze and feeling the need to monitor everything that goes through the lips, we can simply start being a bit mindful of the things we ingest, and mindfully and gratefully absorbing them and their nutrients. END_OF_DOCUMENT_TOKEN_TO_BE_REPLACED 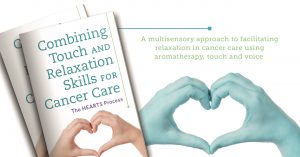 A multisensory approach to facilitating relaxation in cancer care using aromatherapy, touch and voice, the HEARTS process – created by Ann Carter – offers a new way to help patients achieve a state of relaxation and calm as quickly and easily as possible.

In their new book, Combining Touch and Relaxation Skills for Cancer Care, Ann Carter and Peter Mackereth discuss principles which may influence the effectiveness of touch and relaxation therapies, emphasising that there are approaches that can be learnt and utilised by healthcare workers (and carers) who are not qualified in any therapies when working with distressed and vulnerable patients. END_OF_DOCUMENT_TOKEN_TO_BE_REPLACED