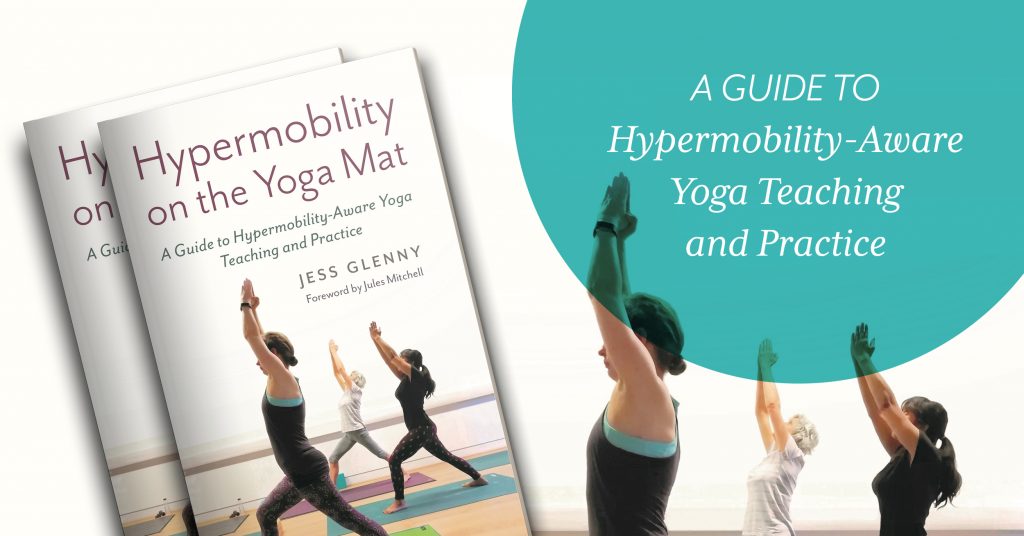 Jess Glenny is a Yoga Register Teacher (Elder) and a C-IAYT yoga therapist. She has been practising yoga with hEDS since 1981, and for many years has specialised in working with hypermobile people. She is the author of The Yoga Teacher Mentor: A Reflective Guide to Holding Spaces, Maintaining Boundaries, and Creating Inclusive Classes (published in 2020) and her new book, Hypermobility on the Yoga Mat: A Guide to Hypermobility-Aware Yoga Teaching and Practice is available for pre-order now, publishing in February 2021.

In this article, adapted from her new book, Jess discusses why hypermobile people might be drawn towards the practice of yoga.

During my teacher training I was told, you probably won’t see hypermobility in your yoga classes very often, but it became apparent over the duration of our training that many of my fellow students were hypermobile (to varying degrees). While some had been diagnosed, others hadn’t been aware of their hypermobility prior to our training. I therefore began to question whether, rather than being a rarity in a yoga class, hypermobility was actually far more common than initially thought.[i]

Indeed, as we have seen, hypermobile people are one population you are pretty much guaranteed to encounter in significant numbers in any yoga class you teach. Why is this? Why do people whose range of joint motion is so excessive as to be considered pathological flock to an activity with the potential to increase it further? There are a number of reasons.

What drew me to yoga and dance practices initially was a dimly felt but deep disconnect from my body, experienced not on an intellectual level but in some much more fundamental place in myself. Only many years later did I understand that this sense of being not securely contained within my body or consistently visible to others in it was the product of a lack of proprioceptive feedback – that it was biological and neurological in origin. Practising yoga required me to cultivate close and steady attention to my body, and being in movement seemed to turn up the proprioceptive dial, so that I felt a clearer and more frequent sense of physical cohesion. Many of the hypermobile people I teach report similar experiences on first coming into contact with yoga. Sura, a yoga practitioner with hEDS, says: 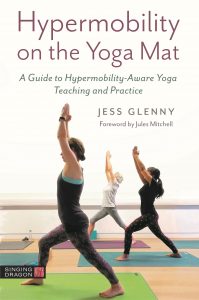 Hypermobility on the Yoga Mat

Even just lying on the floor in my first yoga classes was amazing for me. It was as if I felt connected into my body by all the points where I could feel the floor, whereas at other times it seemed as if I could easily float out of my body and get lost.

I started to feel all this sensation, and it was as if I was actually ‘in’ my body for the first time. I was getting all this new feedback, and it was very satisfying.

Being ‘good’ at yoga

As a teacher, you won’t need to be told that yoga is a whole-person practice in which we move towards integrity, not a stretching competition. Nevertheless, for some hypermobile people first encountering yoga, flexibility is experienced as an asset, enabling them to access postures (albeit in a rather ramshackle way) that others struggle even to approach. Their flexibility may be admired by other students and they may be told they are ‘good’ at yoga – all of which can be a great incentive to go on practising. Hypermobile yoga teacher Bernadette Birney says:

People tend to enjoy things we’re good at. Speaking from my own early yoga experience, I equated being limber with being ‘good at yoga’. I enjoyed my practice more because I felt successful. That early ‘success’ encouraged me to stick with it.[ii]

Perhaps on the face of it, this might seem a little shallow, but we need to bear in mind that for many hypermobile people, physical activity is a site of repeated failure. As a child, I dreaded PE (physical education) so intensely that I felt sick throughout the day preceding a lesson, and PE-anxiety dominated my week. Running even short distances made me dizzy and breathless (POTS) and hurt my joints (hEDS), and I was unable to kick or catch a ball (dyspraxia). I failed to pick up the rules of games that no one ever actually taught me (dyspraxia), and as an autistic person, I also struggled to understand the dynamics of teams. I didn’t want to play and no one ever wanted me on their side. I kidded myself that I didn’t care, but I still flinch every time I see a game of park rounders.

These are not unusual experiences for people with hypermobility, and many of us just stop moving much at all, believing that we’re ‘useless’ at anything physical. Discovering an activity that you can not only do but are actually praised for can therefore be a momentous – even life-changing – experience, as Kara, a yoga practitioner with Hypermobility Spectrum Disorder (HSD), explains:

I’m rubbish at sports, and by the age of 30 I had become some sort of sloth. Then I discovered yoga. It was the first physical activity I was good at and got approval for. Of course, I know now what the point of yoga is, and I was probably hanging in my joints and all that, but being praised still made me feel good. I could actually participate, even excel. 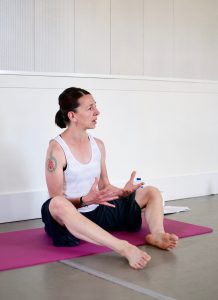 To people who know nothing about genetic hypermobility, the idea of excessive flexibility often suggests a sense of freedom and capacity; in fact, though, the experience of being hypermobile is often one of tightness and restriction. As specialist hypermobility physiotherapist Rosemary Keer and occupational therapist Katherine Butler explain, ‘Hypermobile patients often complain of “stiffness” ’; however:

What they feel has no relation to the common definition of stiffness that may be experienced by anyone with arthritis or a healthy person who over-exerts themselves. Upon examination, unlike a patient with arthritis, they will often appear to be mobile with a range of movement equal to or greater than average and therefore have no apparent functional deficit.[iii]

Where there is structural hypermobility, the nervous system tends to seek to create tension – and it does this in ways that are often uncomfortable and unhelpful to functional biomechanics. Excessive mobility may also cause multiple micro-tears with accompanying inflammation, and there may be early-onset joint degeneration present too. All in all, it’s not surprising that one hypermobile person I talked to described stretching as ‘blissful’. Especially on initial contact, yoga may seem like an opportunity for endlessly stretching out all the endlessly tight places. Over time, of course, this becomes problematic.

The capacity of yoga to alter mind state and emotions, promoting a sense of calm and general well-being, often feels like a godsend to an over-adrenalised and chronically anxious hypermobile person. Vera, a yoga practitioner with Marfan Syndrome (MFS), says:

I initially went to yoga for fitness. The thing that kept me coming back, though, was the way it made me feel. Since going to yoga, my self-harming has reduced drastically and I generally feel more positive and less stressed.

The quiet and tranquility of yoga practice (in most settings, anyway) also contributes to nervous system regulation and is widely appreciated, providing a kind of sanctuary to many hypermobile people. Derek, a yoga practitioner with HSD, says:

Even though the class was in a community centre, and there was lots of activity going on in the building, in the yoga room it felt so calm and peaceful. All the noise from outside fell away. It was just me and myself in this safe space.

As practice progresses, yoga can be a place where hypermobile practitioners find strength, structure and stability – without pushing too hard or working to the point of exhaustion. As a controlled and mostly low-impact movement form, in which slower and steadier responses are valued over quick-fire reactions, it may be safer than other types of physical activity, presenting less risk of tripping, straining and moving in biomechanically unhelpful ways. Lucy, a yoga teacher with HSD, says:

I think at first the sensation of stretch in the joints gives us a way of actually feeling our bodies in a good way. Then we learn not to overdo it and strengthen instead of stretching, but all the time improving our embodiment and proprioception.

[i] ‘Hypermobility in Yoga’, 29 June 2018: www.learntoloveyoga.co.uk/yoga-anatomy/hypermobility-in-yoga.

Hypermobility on the Yoga Mat

A Guide to Hypermobility-Aware Yoga Teaching and Practice

Hypermobile people are generally over-represented in yoga classes, yet often go unrecognised and receive little guidance about how to practise in hypermobility-friendly ways. Many yoga teachers have received little or no training about how to work with this vulnerable population.

The book considers what hypermobility is and offers teachers general guidelines as well as specific practical techniques for including hypermobile students safely and effectively in classes. For hypermobile students themselves there are lots of suggestions for making a yoga practice helpful and beneficial.