by Susan Quayle, author of The Mouse’s House: Children’s Reflexology for Bedtime or Anytime, illustrated by Melissa Muldoon

If you are thinking of transitioning from a practitioner to a teacher I would definitely recommend it, especially if you have created your own beautiful course and have a passion to share it with the world. On the whole, the world is just waiting for you to share your vision with them.

As a maternity and fertility reflexologist I build powerful relationships with women at the most amazing times in their lives. Working with pregnant women is such an awe inspiring privilege with the therapist developing a connection to both mother and child. Very soon after making this career choice I realised that all too often the relationship ends abruptly after the child is born when really a whole new relationship should be starting. Babies absolutely love reflexology, whilst inside their mothers womb as well as skin to skin, so to speak!

For a long time after having this realisation I thought about how I could continue to see parents after their babies were born and the answer I came up with was to run a course for them. There was a problem with this idea though, what and how would I teach them? Just coming along for a session would be great but wouldn’t really be building any relationships or offering them the chance to bond with other new mothers. So the content needed to last for more than one session, be engaging, attractive and fun. I thought I might be able to create a course but there was a lot of work to consider and I really felt that without a proper concept it would feel a bit flat. I thought a lot more, for months, years even! As with all ideas they come after a lot of ground work has already been put in and one day in the bath an idea came to me of The Children’s Reflexology Programme, TCRP, and a lovely, simple story about a mouse that would visit all her friends and ask for help to make her new-found house cosy. The Mouse’s House and the development possibly for future courses were born. I have become a strong believer in the concept that if you work on ideas for long enough everything falls into place.

There was a lot of work involved in creating the book and finding Melissa Muldoon, the amazing illustrator, but after a year we self-published and shortly after that Lucy Buckridge, an editor from Jessica Kingsley Publishers, approached me and we now have the beautiful book that we see today. The Mouse’s House is a rhyming story of short verses where each of the animal characters represents one of the important reflexes and as you read the story to your child you work the reflexes as the characters appear. The result is a simple but complete treatment.

Almost two years after the creation of The Mouse’s House I started writing the first parent course to supplement the material in the book and help parents understand the reflexology better in a workshop style environment. The book with the animal characters had given me the concept that I had felt was missing from a course in the first place. I added a few more reflexes to the course which meant coming up with more characters. I felt that this would add value and would allow me to create specific treatments for a variety of minor conditions of childhood.

The first courses went out in the autumn of 2014 and I was a nervous wreck! I felt pretty exposed standing in front of an audience and teaching my course for the first time….but the mums loved it! I received messages from the very first day telling me how the reflexology had worked for a variety of conditions that their children were suffering and they couldn’t wait for the next session. I ran three courses for one hour a week over six weeks. The youngest we had on a course was four days old and he was suffering from constipation – but not for long! Everyone got something out of the course and all of them have continued to give their children reflexology since with the beautiful handouts that they received and their own copy of The Mouse’s House, which make up a parent pack and which the children loved.

The feedback was fabulous and inspired me to continue, so after Christmas I began writing an instructors course. I realised that if I wanted this to reach the number of people that I was thinking of I would need more than me out there teaching it to parents. I had already been thinking about the concept of a website that would link the instructors to their courses and allow anyone anywhere to find an instructor in their area. I had been asking my husband, who is a programmer, if he could design such a website for me and in January he started to work on what we have now. A large part of the instructor business is based online with lots of marketing materials and the Google Earth link to the site. So we had a way of instructors reaching their parents and telling the world that they were here.

One of the most important factors for me in creating TCRP was empowering parents. I wanted to bring the powerful effects of reflexology to them in a simple fun package that they could utilise anywhere and at any time. So now that I was writing an instructor course I thought about what I wanted to achieve from this course and again I wanted to be able to empower parents. I thought about the baby massage business model where there is no pre-requisite to be a massage therapist to train and I thought how wonderful it would be to be able to offer parents, mothers in particular, the option of having a sustainable, ethical business that they could work at alongside their parenting and which would be holistic and positive in supporting other families in such a beneficial way. Having seen mothers who’d had to go back to work, leaving their baby when they didn’t want to, it felt great to be able to give them another option, as a long term business plan or for a short time until they were ready to resume a career.

For me this was a huge thing. I felt that I was breaking many rules. As far as I was aware, in this country, all infant reflexology courses were taught by qualified reflexologists and mine would be the first to change this ideology. It wasn’t just parents that I wanted to offer this training to. Baby massage teachers, baby yoga teachers indeed anyone who worked or had a healthy interest in helping parents and their children would be able to train as an instructor.

By March I was pretty much done. The coursework was beautiful and there was lots of it! All the reflexology was wonderfully simple, clear and most importantly engaging. All the reflexology protocols had been carefully created by a professional reflexologist and the marketing material was all to a very high standard.

On a whim, in March, I published details of the first course – just to see what the reaction would be – and I got an instant response from several people. The first course ran in April and was a great success and a huge amount of fun. As I was aware that being the focus of attention wasn’t my favourite thing I built in lots of things for the students to do to draw it away from me. So much came out of this first course. Once you create something new it is often surprising how many different avenues can open up. The second instructor course ran in June and this enabled me to apply for approval from the Association of Refelxologists in the UK. I sent all the course work off, feeling very nervous about what they would say in regards to the not needing to be qualified to train. I have to admit to being quite flabbergasted by their response! They loved it and wanted to approve it but wanted me to make a couple of small changes – mostly in relation to teaching the reflexology to trained reflexologists, which was fair enough. I now have approval and the good news is that reflexologists only need to do two of the normal three days’ training.

I have lots of courses planned and have been in close contact with many wonderful reflexologists around the country who are helping me to set up all sorts of new initiatives with this concept. There are a lot of areas opening up that I had never really thought of and whole new concepts coming out of this one too.

I have also continued to write books and have written two more and am half way through a third for older children. Writing has become my passion and empowering parents through reflexology my mission. I really hope that infant reflexology can become as mainstream, accepted and appreciated as baby massage – but let’s not take forty years to make it happen this time!

Susan Quayle is an experienced reflexologist and complementary therapist who has developed her skills and qualifications to specialise in the areas of fertility, maternity, babies and children. Susan has created and developed ‘The Children’s Reflexology Programme’, which uses her guide The Mouse’s House. The course has been approved by the Association of Reflexologist. To find out more, including dates and venues across the UK, please visit www.kidsreflex.co.uk.

Susan lives in Devon, UK and her clinic is based in Exeter and at her home, she now spends much of her time empowering parents with reflexology through her innovative books and courses. 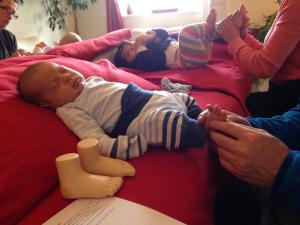