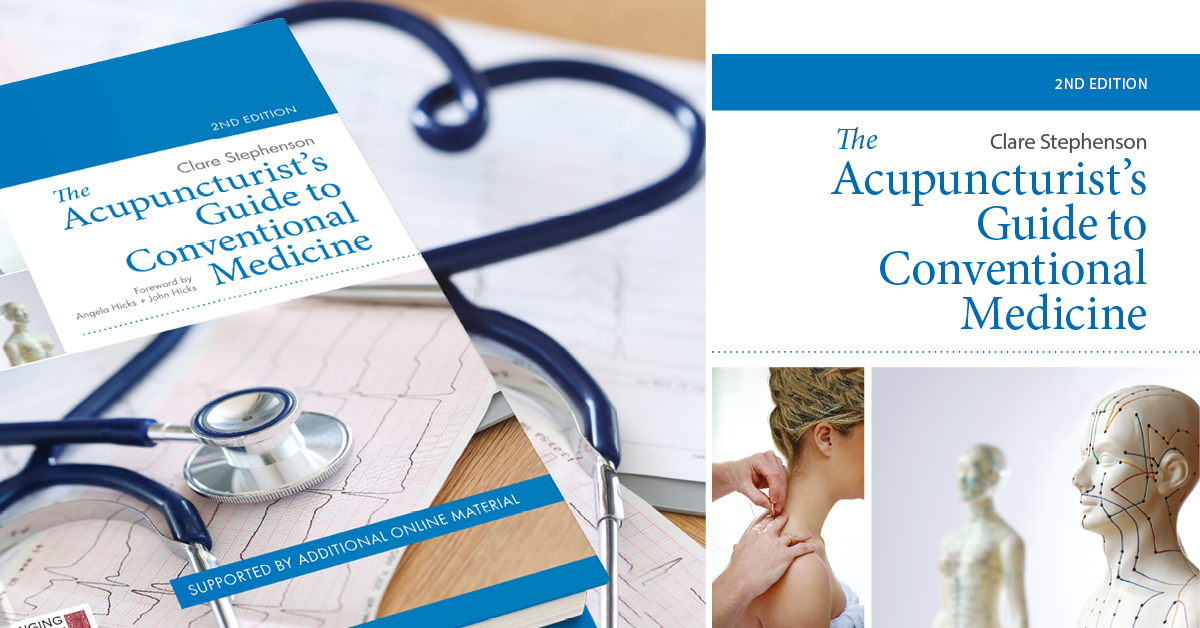 Clare Stephenson, author of The Acupuncturist’s Guide to Conventional Medicine, discusses how knowledge of Eastern medicine can improve conventional medicine practitioners response to patients, if complementary therapies should be incorporated into routine medical practice and her background in Eastern and Western medicine.

Clare, you trained as a doctor in conventional medicine. What led you to discover Eastern medicine, and Acupuncture in particular?

I initially had close contact with Eastern medicine over 20 years ago through attending an evening class in Tai Chi. Tai Chi is based on Qi Gong, the ancient system of movements for health. Qi Gong is considered one of the five pillars of Chinese medicine – both share the understanding that the physical body is a manifestation of an energetic foundation which can be manipulated by subtle and not-so-subtle means in order to promote health. The exposure to the practice of Tai Chi sparked my interest in learning more about Chinese medicine.

The more I understood about Chinese medical health philosophy and its integrity, the more I wanted to learn. I travelled to China where I saw acupuncture being practised as a front line medical treatment alongside western medicine. This then inspired me to undertake a three year formal training course in the practice of acupuncture at the College of Integrated Chinese Medicine in Reading.  All this was whilst I was also working in UK general practice and public health medicine, so I was continually being challenged to understand how these two approaches to describing health and disease might overlap!

Have you encountered any difficulty when trying to compare Eastern and Western medical practices, both when preparing this book and in practice?

Initially, I found that that the way in which Chinese medical theory has been translated into English posed a significant challenge to being able to make meaningful comparisons and find meeting points between the Eastern and Western paradigms. I think this is a challenge which continues to face students of Chinese medicine in the West and also even experienced practitioners. The problem is that the early translators assumed parity of meaning between the Western and Eastern organ systems (e.g. the heart, liver and kidney) and also placed climatic and specific medical terms (for example wind, dryness, phlegm, blood stagnation) onto pathogenic processes which are not physical in the same way in Chinese thought.

In order to make meaningful comparisons I had to work out a method by which I could compare like with like. Eventually, I realised that both systems describe the commonly shared descriptions of the symptoms and signs of disease, and so my comparisons are based around focussing on symptoms and signs as the bridge between the two medical languages.

How can the knowledge of both conventional medicine and complementary medicine improve practitioner’s response to patients?

Firstly, knowledge of conventional medicine will enable an acupuncturist to easily understand any medically diagnosed conditions from which the patient might be suffering, and this will help build a rapport with the patient. Importantly, it will help them to recognise if there are any serious warning signs in the patient’s condition which might benefit from a Western medical referral.

A fluency in translation between the two medical disciplines will enable the practitioner to explain their acupuncture treatments in language which makes sense to the patient. For example, to talk about Tonifying deficient Kidney Energy to a patient with an immune deficiency when they have been told by their doctor that they have excellent kidney function has the potential of causing confusion or worse, mistrust. Without prior explanation it might appear to the patient that the Kidney treatment is directed to the physical kidney organ alone. In contrast, to be able to explain carefully that the ancient Chinese recognised that there was a far-reaching energetic system which both influenced the function of the immune system as well as the action of the kidneys and that acupuncture points were recognised which could benefit both these bodily functions, as well as many others…then this will start to illustrate to the patient that Chinese medicine works in a very different way and at a different level to medical treatments.

Do you think the healthcare system in the UK should incorporate more complementary therapies into routine practice?

This is a difficult one! Of course I would love to see complementary therapy to be provided free at the point of delivery as is the case for many medical treatments.

However, I know full well that the medical treatments offered in Western healthcare systems are increasingly chosen according to proven “effectiveness”. Moreover, healthcare workers are increasingly constrained with regard to the processes by which they offer health care. The gold standard for proof of effectiveness is the large scale “double blind randomised controlled trial”. Once effectiveness has been proven by means for clinical trials, because of constraints relating to safety and cost effectiveness, a treatment should be standardised when given to patients. This would encourage the use of, in the case of acupuncture, formulaic treatments. These are used by medical acupuncturists and indeed are valuable to an extent. However, current evidence only proves value for formulaic acupuncture for a very narrow range of symptoms such as headache, nausea and back pain.

In contrast, many holistic complementary therapies work in subtle and often unpredictable ways. For example, every one of my acupuncture treatments is tailored toward the individual patient I am treating and not just to their symptoms. This means that each treatment is unique and could not be standardised without a loss in the depth of its influence on the patient. Because the treatments are unique and matched to patients, they simply cannot be assessed by double blind controlled trials.

For complementary medicine to be practised so that it could benefit patients at a deep level, then as well as adhering to high professional standards, the therapists would need to be given the freedom to practise in a non-systematised way. Regrettably, I don’t think there is currently a place in Western healthcare systems to allow such an unscientific and difficult-to-measure approach to medicine.

Lastly, what do you hope readers take away from your book?

Writing the book was inspired by seeing students of acupuncture who were failing to recognise the value of Western physiology and pathology in relation to their Chinese medical studies. Often these were people who had a very disillusioned perspective of medicine as a result of a negative past experience of Western medical health care.  What I would most hope that readers might take away from the book is the message that conventional medicine describes a measurable aspect of the energetic truth about a patient and their symptoms, and so is highly relevant to acupuncture practice! I would hope that readers would be inspired and to learn more about the material basis of disease through reading the book, and would also be equipped, through learning about translation to Chinese medical language, to use this knowledge to further inform treatments of patients in the clinic.

If you would like to read more articles like this and hear the latest news and offers on our books, why not join our mailing list? We can send information by email or post as you prefer, and please also tell us about your areas of interest so we can send the most relevant information. You can unsubscribe at any time.