Singing Dragon and Jessica Kingsley Publishers have recently started developing an exciting new line of comics and graphics novels and we are now open for submissions.

JKP are committed to publishing books that make a difference. The range of subjects includes autism, dementia, social work, art therapies, mental health, counselling, palliative care and practical theology. Have a look on www.jkp.com for the full range of titles.

If you have an idea that you think would work well as a graphic book, or are an artist interested in working with us, here is what we are looking for:

We are looking for book proposals that are between 100 and 200 pages, black and white or colour, and explore the topics listed above or another subject that would fit into the JKP/Singing Dragon list. Specifically we are hoping to develop more personal autobiographical stories.

Here are the guidelines for submission:

We have some shorter comic projects underway and are looking to expand the range of topics covered. These books can run from 20 to 40 pages, black and white or colour, with dimensions of 170x230mm. We are mainly looking for comics that provide ideas and information for both professionals and general readers.

For example, the first in this series, published by Singing Dragon, is a book exploring the latest developments in chronic pain research.

Here are the guidelines for submission:

When submitting please provide low-res images and send them, along with everything else, to Mike Medaglia at mike.medaglia@jkp.com

If you have any other ideas that don’t directly relate to the subjects described above but you feel might still fit into the Singing Dragon or JKP list, please feel free to get in touch with ideas and enquiries on the email above.

Si Mullumby has dedicated his life to playing the Yidaki (didgeridoo). His career has spanned many countries and he has performed countless concerts and performances as well as taught workshops on Yidaki playing. 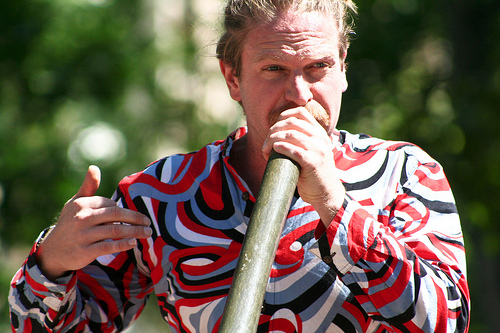 The Tzolkin Trilogy is the maturation of Si’s playing. It uses the primal sounds of the Yidaki to explore the universal processes of creation and consciousness as represented in the Tzolkin, or Mayan Calendar, and the nourishing and healing aspect of the sound of this instrument.

In this exclusive extract from the work, Si Mullumby discusses the therapeutic potential of the Yidaki:

Firstly there is the breath. The Didgeridoo uses a rhythmic breathing method known as circular breathing. It’s a way of pushing air out of the lips using the cheeks as bellows, while snatching quick breaths of air through the nostrils into the lungs, keeping the sound droning continuously. When playing the didgeridoo, the breath moves in rhythmic cycles, and these cycles alter consciousness.

Secondly there is the element of catharsis. An aspect of the expanding awareness that this rhythmic breath creates is that it opens a channel for any unexpressed emotions lingering in the zone between the conscious and unconscious mind. These feeling may be expressed by voice and expressed from the body as sound.

Thirdly there is the drone. Unlike the human voice, which stops and starts while chanting AUM, the didgeridoo sounds this syllable continuously without interruption producing very powerful low-pitch frequencies and undertones. This instrument is the ultimate tool for meditating on the vibrational essence of AUM.

And finally it is music. With capacity of the entire vocal spectrum, plus the infinite range of rhythm, the didgeridoo combines all these incredible spiritual tools within the warm embrace of music.

It’s a great tool for self-transformation, and for transmitting truth to the world in sound. It inspires people who hear it to come along for the journey – the inner journey guided by the Dream Drone. And those who listen lend the light of their awareness to that of the player, adding the dynamic force of collective consciousness to steer the journey to deeper levels.

Here he answers some questions about his new book, The Secret of Everlasting Life: The First Translation of the Ancient Chinese Text on Immortality.

I’m now 62 and have been doing qigong some forty years. My interest goes back to when my teacher Giafu Feng (translator of the Tao-te Ching with Jane English) pointed out the early alchemical poems of China, and I soon found out that the Can Dong Qi, which I entitle The Secret of Everlasting Life was not only the oldest, but also the most revered, and the ‘grand-daddy’, as I call it, of them all. Also, it had never been translated, except as a chemical treatise – which was obviously getting hold of the wrong end of the stick!

What is special about these texts?

They have been enormously studied in China. I list 69 separate editions of the Can Dong Qi at the end of my translation. Not all of which I have consulted, I have to say! However during the 80’s I had the good fortune to study in Chengdu, Sichuan in China, with a very special qigong teacher. And I was fortunate to return to England with an excellent edition of this work, the requisite dictionaries and some sensitive instruction, all under my belt. I think I knew then it would take probably 30 years to complete

The obvious next step was to teach myself to read these texts. Nobody else had attempted a complete translation. And I had learnt from Gia-fu that the best way was to study the Chinese commentators on the work. (We had worked together on the I Ching, or Book of Changes, at that point). So I literally started page one, character one and went from there. At the same time I continued my acupuncture, tai-chi and qigong training – teaching as well. And I found this happy mix very conducive. I had voluminous notes (I can write very fast!) from China and my time with Gia-fu. And somehow the work got born.

I have to say that I wrote to Professor Joseph Needham about the work, and sent a sample – and was fortunate enough to get a letter back encouraging me to continue in my work. He especially like the fact that I had made the translation into English in short, poetic lines – thereby copying the Chinese text. I was most keen to be as faithful to the original as possible, you see.

What is the book’s message?

Well the book itself teaches a method of meditation which is well-known – and often, nowadays, termed ‘qigong.’ It makes much of the cultivation of stillness in body and mind. Reader, you probably have yourself felt those precious moments of quiet in your life, no? I think we all come across them. As if an angel crossed our path. Perhaps facing a beautiful sunset, a special moment with a friend, or the satisfaction of completing, in its own time, a piece of work. The genius of the Chinese sages was that they found a method, a technique akin to Indian Yoga, by which this experience could be cultivated, taught and developed. Of course, all this is now being verified by modern research, brain imaging and such like, and work on neuro-transmitters; the benefits of regular pratice of qigong are at last being recognised. Wei Boyang himself talks in these poems about “grasping onto the quiet and solitude, those rare times, so tranquil and still.” He lived the life of the scholar-hermit-alchemist so popular in the Taoist tradition. It is all to do with finding out what our common humanity is about. Very Chinese, you know.

So, what is the secret of everlasting life?

Well I suppose it is embracing this method, in its rawest aspect, coaxing internal physiological transformation, revelation and philosophical enlightenment. Yuyan (one of the Chinese commentators) describes it as a method of inner development which shows “all people their ability to reflect back their brightness to light up within (huiguang neizhao), so that their out-breath and in-breath then merge together into a state of utmost peace.” I think that about says it all! (Big Laugh!)