As part of our Meet The Singing Dragon Author series, we speak to authors to discuss their motivation for entering their respective industries, inspiration for writing their books, what challenges they faced, and who they would recommend their books to. Is there a specific Singing Dragon author you would like to hear from? Let us know in the comments or join the conversation using #MeetTheSDAuthor.

Z’ev Rosenberg, author of Ripples in the Flow: Reflections on Vessel Dynamics in the Nàn Jing

How did you become interested in Chinese medicine and acupuncture?

My interest in Chinese medicine began in my teen years, when I started practicing yoga and macrobiotics at seventeen years old in New York, to which I continue to practice both disciplines today. This was in part to the “sixties revolution” where consciousness and ecology came in on the boot heels of the Beatle’s personal explorations. I took classes in shiatsu with Shizuko Yamamoto in New York and Boston, and opened macrobiotic centers in Boulder, Colorado and Santa Fe, New Mexico after a stint in the natural food business in the early 1970’s.

Shiatsu, of course, is based on the same channels used in acupuncture, and macrobiotics based on yin/yang and five “element” philosophy applied to dietetics. In the mid 1970’s, I studied at a small naturopathic school in Santa Fe, taking courses in “Western” herbal medicine with Michael Moore, dietetics and body therapies. While I was there, I sponsored a seminar with a macrobiotic teacher (Naboru Muramoto, author of Healing Ourselves), who insisted that to be a macrobiotic teacher, one had to study yin/yang theory in depth from the Chinese/Japanese medical classics, specifically the Shāng Hán Lùn 傷寒論.  He took my pulse, and I had my first acupuncture treatment, with gold needles and moxa! He also sold and prescribed Chinese herbs. In the late 70’s, I found an acupuncture school in Santa Fe, and graduated in 1982/3, immediately moving up to Denver/Boulder, Colorado where I built up a huge practice over a seven year period.  From there, I moved to California to practice in the late 1980’s.

How did you begin your career and were there any challenges in entering this field?

I started my career in Colorado, where unlike New Mexico, there was no licensing, and only thirty people practicing in the entire state. I became president of the Acupuncture Association of Colorado, and we succeeded in passing a licensure bill…just in time for me to move to California. Being a part of the first generation of practitioners, there was no road map, we had to create the profession ourselves, with very few books translated in English, we required a lot of inspiration and sweat, as we blazed new trails in medicine.

What did you enjoy about writing the book?

The Nàn Jīng 難經 was one of the first medical classics to be translated into English to academic standards by Paul Unschuld in 1986, where a couple of my early teachers based their practice on this text. My investigations into Japanese acupuncture, specifically books and seminars by Kiiko Matsumoto, informed me that much of the acupuncture in Japan was based on the Nàn Jīng 難經’s five phase systematics. Having read and reread the Nàn Jīng 難經 over a twenty five year period, specifically the pulse/vessel chapters 1-22, I felt I was ready to share my insights, commentary and clinical experiences with this approach to reading the pulse/vessels. My goal was to write a clear, concise book with depth, but not overly wordy or obscure. There is a structure and dynamic to the text, and I hopefully have succeeded in revealing this “vessel architecture” to the reader.

To whom would you recommend the book?

This book was written for students in acupuncture colleges, who often demand more depth to their vessel diagnosis studies, practitioners of five phase acupuncture systems, and anyone interested in learning more on vessel diagnosis. It can also be read as a clinical commentary to Paul Unschuld’s updated translation of the Nàn Jīng 難經. 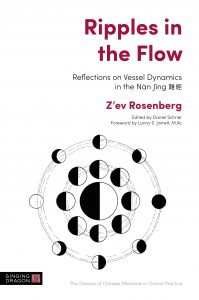 In Z’ev Rosenberg’s second book, the scholar-physician shares his insights from his study of discrimination of movement in the vessels in the Nàn Jing. This book provides an accessible window into the world of classic vessel discrimination, and a deep explanation of the Nàn Jing as well as advising how it can inform modern clinical practice.

Is there a specific Singing Dragon author you would like to hear from? Let us know in the comments or join the conversation using #MeetTheSDAuthor. Or join our mailing list to be the first to hear about our newest releases.