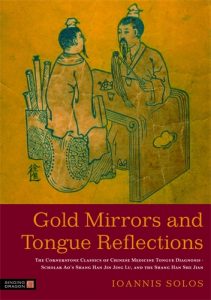 Please note: This blog entry presents some very gruesome tongue pictures related to the corona virus. Although in China it is now legal for traditional doctors to assist in the management of epidemics in well-regulated hospital setting and fever clinics, in other countries most traditional clinics are not equipped to deal with such events. Please refrain from trying to provide treatment unless your clinic is fully equipped to do so, and also always act in accordance to the laws of the country you’re licensed to provide healthcare.

In 80% of the cases, the Covid-19 will most likely resemble a seasonal flu condition. It is highly unlikely that someone with a severe infection will first try to consult a traditional doctor. However, in case they do, please make sure that they call a hospital or an appropriate hotline for further assistance.

Because someone has the Covid-19, it doesn’t mean that all the tongues will look as horrible as in those extreme examples. Some people may be completely asymptomatic or exhibit the signs of a mild infection, and have an almost normal tongue.

Be a responsible Chinese medicine practitioner, and understand the legal limitations of our raison d’être outside of China.

If you can legally provide treatment in a hospital or fever clinic, please consult these photos, and all the information in my book, Gold Mirrors and Tongue Reflections, to pinpoint the correct diagnosis through the tongue and provide the patients with an herbal treatment for their exact condition, according to their specific syndrome differentiation.

The text for these images is taken from Gold Mirrors and Tongue Reflections, while the photos are of recent Covid-19 patients. 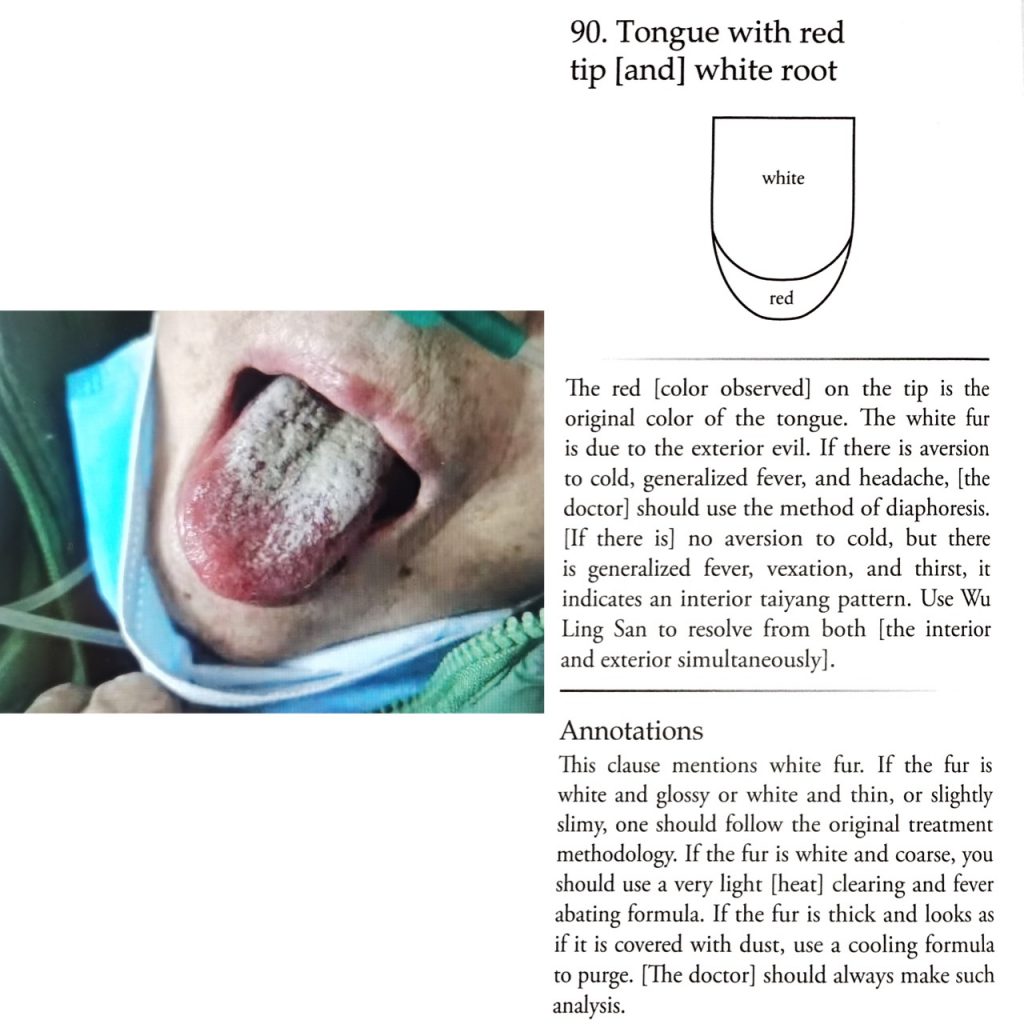 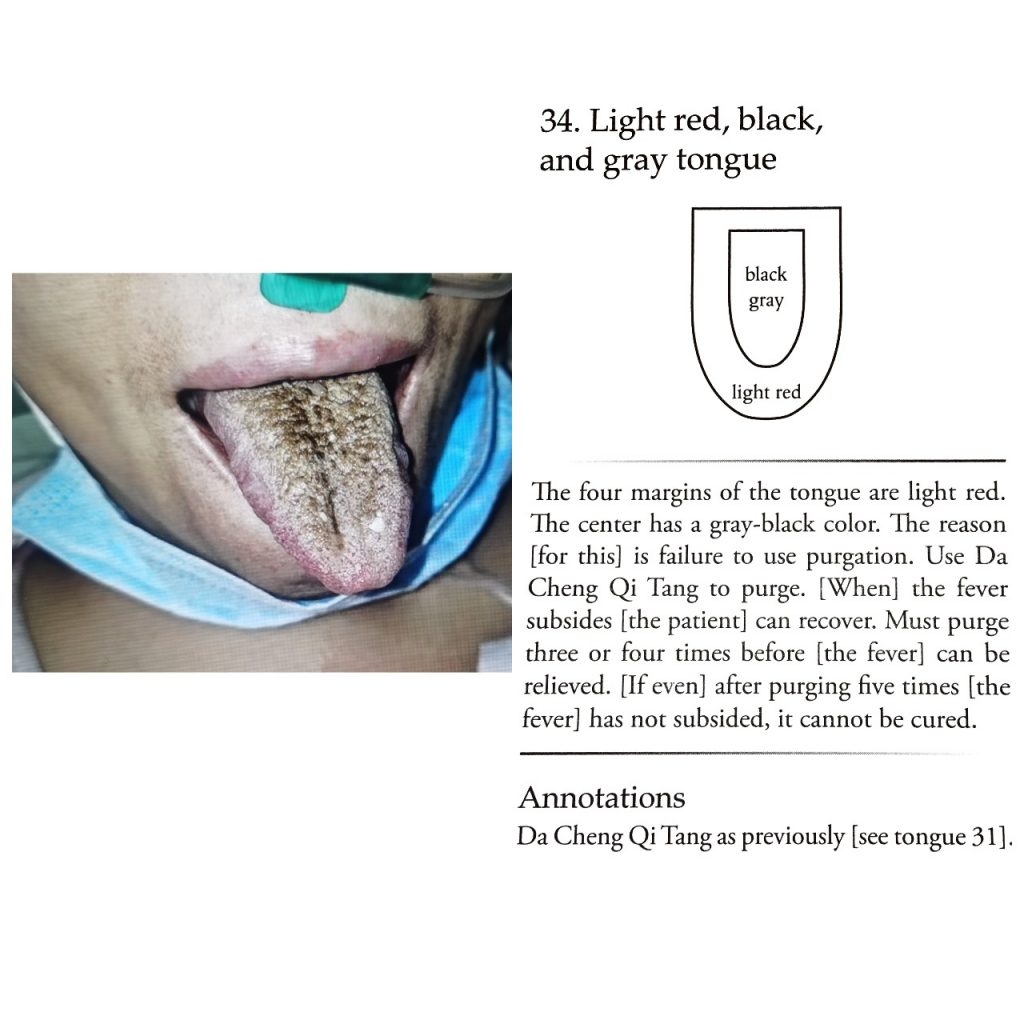 At the height of the SARS outbreak, in 2003, when China was still trying to understand and control the virus, the Chinese Government requested that several Traditional Medicine specialists attend the meetings in the hope that something in the long history of Chinese medicine would be able to assist in managing the epidemic. At the time traditional medicine was not legally allowed to intervene in the management of infectious disease outbreaks.

This was the tongue diagnosis system initially developed during the second pandemic by Ao Ji-weng in the Jin and Yuan Dynasty, and later expanded by Du Qing-bi, and Xue Ji during the Ming, and finally corrected, expanded and standardized by Zhang Deng in the Qing. Through many editions and commentaries the original text expanded over time to cover and explain all diagnostic possibilities for most epidemics.

The premise was very simple. The doctor would just look at the tongue of the patient, sometimes ask a couple of questions and be able to prescribe a formula, without the need to take the pulse or have a prolonged contact with the infected.

After 1960 though, the development of antibiotics and anti-virals replaced those practices. In time, the oral teaching was lost, and because of the historical circumstances of the 1960’s and 70’s, the system was to a certain degree forgotten.

Back to 2003, after similar explanations, the Chinese government ultimately allowed the specialists to access some of the SARS patients, and according to the reports, they were witnessing the same tongue presentations described in the tongue classics, which nobody had seen in living memory. A few photos were taken with early digital cameras and primitive cellphones, through a cellophane medium, and from a distance, due to the fear of even approaching the infected. Unfortunately, those photos were too fuzzy or very small, and did not follow any photographic standards. For this reason, they could not be used for accurate reporting in the bibliography, or comparison with the classics. In any case, after the disease was controlled with steroids, the whole premise of using the tongue was abandoned. In the 17 years that followed, most of those traditional specialists retired, and because there wasn’t a second SARS outbreak, even the mainstream medicine did not see the need to develop a vaccine.

Now, in 2020 at the height of the Covid-19 pandemic, once again we are witnessing the same classic tongue manifestations. Amazingly, the Chinese government this time allowed a new generation of traditional doctors to provide treatment, and therefore, a large number of tongue photos have been shared in professional forums for comparisons and discussion. As it can be seen from the illustrations, diagnosis and treatment is faster and accurate if it is conducted the traditional way.

From the lessons learned in 2003, and after several years of researching and cataloguing the classics of tongue diagnosis, I published the book Gold Mirrors and Tongue Reflections, presenting the cornerstone classics of Ao’s school of tongue diagnosis. Its publication in 2012 resulted in a rare renewed interest in Ao’s tongue diagnosis in China, which let to the reprint of the classic tongue books by the major publishers. In 2017 I also co-authored commentary for a new Chinese edition of Ao’s classic, together with one of my mentors, celebrating her contributions in her work on the tongue classics. However there is still a lot of work to be done to salvage the system and allow its clinical relevance flourish once again.

This text introduces important aspects of the earliest writings on tongue diagnosis to assist the reader in understanding its development. It presents the first translations of two of the most influential tongue diagnosis texts, the Golden Mirror Records and Tongue Reflections in Cold Damage. Read more