An Invitation to Read: SEVEN SCENTS: Healing and the Aromatic Imagination by Dorothy Abram 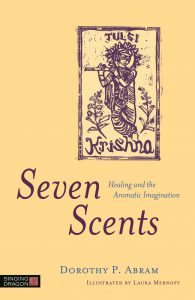 SEVEN SCENTS: Healing and the Aromatic Imagination is an invitation to enter the lives of individuals who have been transformed through their interaction with sacred fragrant plants.  I examine the historical lives of saints, sages, and ordinary people whose encounter with aromatic plants provided the means and method to heal the crisis of a divided mind.  Just as smell retrieves memories from the distant past, the power of the aromatic imagination constructs reality in the present.

The book begins by studying the origins of the repression of scent as an authentic source of knowing in Western society.  The consequences of that rejection for identity are tremendous: we live with this loss.  Echoing Western philosophy from Plato onwards, Freud claimed that, in fact, the evolutionary repression of the sense of smell was a necessary act that initiated our humanness.  Freud explained that by renouncing a four-footed stance in favor of a two-footed posture (that prioritized vision as the dominant sense for survival), humans repressed the sense of smell.

This profound absence continues to leave its trace in our lives today.  Yet, the sense of smell cannot be rejected in our pursuit of human wholeness. Questioning the emotional costs of such an act for contemporary society, this book proposes that reclaiming an aromatic imagination has the potential to heal this fundamental division in the senses.  Paying particular attention to the socio-economic setting that promotes such divisions within, this book seeks to locate and to elucidate the necessary attributes of an aromatic imagination.  Fragrant plants appear in cultural and historical settings worldwide and at various historical moments whereby we may pay witness to the power of reclaiming scent for contemporary consciousness.

Beyond theory, we must consider the lives and cultures that demonstrate the power of the aromatic imagination for what they may teach us.  In this way, we witness its power to unify and heal.  I examine seven fragrant plants and the people whose lives were transformed through their engagement with these fragrant sources.  These seven plants include:

The chapter on sandalwood tells the story of a female sage in 19th century India who healed a problematic case of madness through her use of fragrant sandalwood.  We would not have known about this powerful aromatic healer had she not entered the life of the mad priest of Kali, Ramakrishna.  Her healing method reminds us that, in addition to the physical upset, illness is a story—a narrative—that is constructed to make sense of experience.  It is the aromatic imagination at work.  The narrative that this female sage offered Ramakrishna enabled him to reform his identity from mad priest to divinely inspired saint.  Because they lived in a culture that honored spiritual insight and religious experience, they were named great teachers and creative geniuses.

The chapter on lotus (blue water lily) examines a traditional biblical narrative from the perspective of shamanism.  This is an unusual framework with which to analyze the book of Job.  The focus on the lotus opens new approaches to understanding that are not available without taking the plant and its meaning in the narrative into account.  In fact, it enables the reader to recognize Job as a shaman; that is, as a healer of humankind who gains his expertise through his successful underworld journey and the power of magical plants.  Analysis of this scented water plant reveals the emotional significance of Job’s journey.

The study of the pungently scented neem tree offers a fascinating inquiry into ambivalent states of mind brought together through interaction, inhalation, and ingestion of the leaves of this sacred tree.  It offers powerful lessons in healing through states of mind that must accompany the botanical cures for true healing today.  Highlighting the smallpox epidemic in India and the goddess called Sitala Mata who was believed to be in charge, neem demonstrates the power of faith to bring about healing.   The aromatic imagination heals the divided mind.

The passage of Abraham’s recuperation under the fragrant terebinth tree in the biblical book of Genesis sets the stage for a new look at the ancient tale and often studied story of the near sacrifice of Abraham’s son Isaac by the command of his God.  That is how we are often told this story: that the sacrifice was a God-given command to test Abraham’s faith.  However, by looking at the cultural context in which the act was nearly accomplished and by examining the Hebrew words used, the reader comes to a very different understanding that makes sense of this cruel request.  This evidence also demonstrates the quality of consciousness that Abraham achieved under the terebinth tree resulted in a compassionate ending to the episode.

Similarly, the chapter on fragrant tulsi narrates the specific qualities of plant, mind, and action that are required to bring about an altered state that expands consciousness.   Examining a maiden rite still held in India today, this chapter reveals the use of scents to describe emotional states of expression and achievement of unified consciousness.

Spikenard is well-known from the New Testament as the fragrant oil that Mary of Bethany used to “anoint” Jesus’ feet in the gospel of John.  By examining the original Greek text, we discover that Mary’s actions were directed toward Jesus, the man, in a profound and intimate gesture of relaxation and aromatic healing.

The chapter on jasmine examines this fragrant flower for use in healing epilepsy in the 19th century and in aromatherapy today.  In both situations and at both times, the scent of jasmine facilitated the physical control of symptoms and management of the disease.

In addition to their fragrant scents, all of these plants have psychoactive potencies that were employed in the healing practices described in this book.  But, it is the story that accompanies the botanical treatment by which healing is truly secured.  That story is different in each context where it appears.  However, in all the cultures and contexts that I examine in SEVEN SCENTS, the story pays witness to the achievement of a spiritual level of awareness.  That achievement is brought about through inhaling the scents of these sacred plants in a narrative cultural context.    Whereas the individuals in these chapters require healing from a conflict and crisis of consciousness—the divided mind—aromatic healing demonstrates a unification that is witnessed across cultures and historical eras.  This is the aromatic imagination.

Clearly, such diverse origins necessitate the location of a common underlying crisis; something that traces back to the origin of our shared humanity. I propose that the repressed sense of smell may finally have achieved its reappearance and vindication in the aromatic imagination.

We are healed with scent.