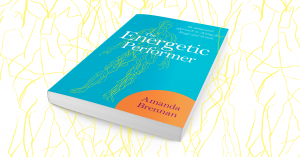 In this blog by Amanda Brennan, author of The Energetic Performer, Brennan provides an overview of her method of acting and how increasing awareness of the body can enhance the acting experience.

I recently ran a series of workshops for professional actors in Santiago, Chile. The course was designed to refine performance skills, explore the craft of screen acting and discover how to create a rich and complex inner life. In my book The Energetic Performer, I refer to the inner life as all that moves with in, thoughts, vibrations of the nervous system, the beat of the heart, the flow of breath, all feelings and emotional expression. Its cultivation is at the heart of screen performance, where the real action is on the inside. To achieve this aim, I began with what I believe is the fundamental necessity: preparing the body for work.

The starting point for an actor is themselves and the riches of their experience. In actor training we often use the analogy of the body as an instrument which needs to be tuned for there to be a real connection to the work. There are three main obstacles which may hinder this, all of which are inextricably linked:

Therefore as with every session I teach, prior to the technical acting technique, I embark on the initial part of the training which is preparing the body to work. Regardless of the experience of the performer, this is always the starting point. It is the stage when I lead participants through exercises which encourage a heightened awareness of their body. I prioritise feeling, the observation of the sensations through listening in to what moves within and work to direct physiological change. I have begun to use the phrase inner organisation, which is how the systems of the body work together and essentially sets the tempo of breath, thoughts, the flow energy/qi, and all messages from the nervous system.

Preparing the body is often known as a warm up, in a similar way to participating in sports it involves loosening, opening and adapting to what happens when we take ourselves out of a usual routine to change how we use our bodies. The basic concept is that it is a period of adjustment prior to commencing work, be that a rehearsal, performance or participating in a class. It is when thoughts may become less erratic or analytical, breath becomes regulated, and the senses awaken. It is when all physiological systems can harmonise and flow together, so a maximum level of efficiency can be achieved to harness a deep level of focus.

I consider that the preparation of the body is quite complex. It needs sustained and regular work rather than fifteen minutes before going on stage or a film set in order for the actor to adapt to change and therefore retain the ability to be fully receptive to themselves, other people and the environment. To return to the idea of tuning it is the pursuit of a connection, where all parts are speaking to each other, a balance between mind and body.

A performer is ideally able to inhabit the imaginative circumstances of a story, for which they are the resource. The term inhabit implies that the actor has been able to immerse themselves into the fictional situation and respond as if they are living it. There is reduction of interference, so their own personal thoughts have been reduced and feelings are connected to the story, they live in the pretence for a short period. Actors are required to slip in and out of this pretence and on occasions under quite challenging situations. Training to have to be able to completely immersed in make believe for a sustained period is not necessarily an easy feat. It requires the facility to be receptive, to go with the flow of your body and to surrender to whatever arises, to the unknown.

My specific approach to accessing increased receptivity is to incorporate many of the fundamentals of qigong and other body based practices such as: tapping, aikido, tai chi and shiatsu.  Embedded within most of these practices is an ancient wisdom of how the body functions anatomically and energetically. The practice of Qigong in particular is a valuable means of quietening the mind, bringing balance, sensitivity, self-awareness and a sense of being whole. Known as a system of healing and energy medicine, it is through gentle movement, static postures and mediation that an enhanced qi flow and control of inner activity is achieved. Once it is practiced regularly participants become more acutely attuned to bodily changes.

The workshops in Chile followed a pattern which I have developed over a number of years. They began with exercises which encourage the performer to become aware of breath patterns, any holding or tightening and unhelpful habitual patterns. I work with the fundamentals of grounding, centre, the distribution of weight, and the felt senses.

Here are a few key components:

The starting point is wu chi, a still posture from qigong, which structurally aligns not only the skeleton but all of the physiological systems including the meridian channels. In this position the joints are not locked, weight sits predominantly over the balls of the feet with the heels remaining the lowest connection to the ground, the coccyx and the chin are slightly tucked. This tends to automatically bring the diaphragm into a position that supports the breath. When at first adopted wu chi feels very unnatural and it is not uncommon for quite strong sensations to arise, often around the chest area. This can be explained as a reuniting of structures which have long been disconnected. If practiced wu chi can bring real harmony and ease.

I remind participants of the natural and most efficient pattern for breathing. We spend some initial time slightly exaggerating the rhythm by sinking on an in breathe and rising on an exhalation. Placing the hands in front with the palms facing down as the body sinks and the palms up as it rises. This simple exercise brings calm and enhances communication.

Having established a structural position we start to work on further uniting the body for which I use qigong sequences such as gathering qi, scanning the body, balance hands, all of which are described in The Energetic Performer. The common feature of which is a reminder to move from the pelvis area, the lower dantien. In acting the concept of moving from a centre is familiar, we often refer to a character as being a thinker (head centre), feeler (heart centre) or a doer (pelvis).

I encourage the idea that we should move from the lower dantien, firstly this enhances a strong connection to the lower part of the body and secondly according to eastern body practices this is the energetic centre. It is usual for us all to spend more time communicating with the upper front areas and locking the pelvis and legs. This is often due to stress and the over dominance of thinking. Maximising the connection to all of the body heightens total connectivity and the facility to feel. For the actor this increases the possibility to inhabit and really place themselves fully into the situations at hand.

A regular exercise from qigong practice is shaking; I incorporate this into the session having introduced the concept of the lower dantien. This simply involves initiating a shake from this centre, while trying to retain the structure of wu chi. This seems a very simple exercise but it serves to massage the organs, wake up and unlock parts that may have been tight or congested. After shaking for up to five minutes I may repeat sequences which aim to balance qi and it is often noticeable that the second time round there is more vitality and sensations, it can seem like each cell in the body is dancing.

It is easy to skip this process of preparation, especially if time is restricted, or when there is often not the space or recognition of the benefits by the actor or director. I consider this to be a false economy. Preparing the body will mean that the actor is ready to imaginatively transcend, they are more in command of their senses and able to focus attention to where it needs to be. Working on an energetic level is truly transformative, it empowers the individual by providing the facility to change states of being and so have command over their instrument. I therefore encourage all who I work with to take the time to acquaint themselves with their own body and the train it in order to being the riches of being fully connected. “Taking a journey inside your body will introduce you to the amazingly intricate and interwoven systems that function as one unit and support the discovery of ease and efficiency’. (Brennan, 2016: 200)

To read more about The Energetic Performer, please click here.