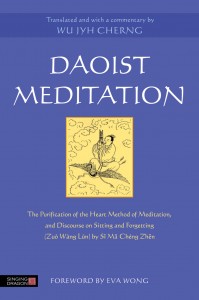 Discourse on Sitting and Forgetting is an 8th century classic text on meditation by Si Ma Cheng Zhen, in his translation Wu Jyh Cherng deciphers the complex Chinese metaphors to make a practical guide  for those looking to deepen their meditation practice. In this extract Cherng looks at what is really meant by “sitting and forgetting” as a definition for meditation.

Zhuāng Zǐ said: ‘Relax one’s body and abandon one’s perspicacity; eliminate one’s norms and let go of one’s intelligence, uniting oneself to the Great Opening. This is called the practice of Sitting and Forgetting.’

Relaxing the body and eliminating the norms is sitting naturally to meditate, without being concerned about norms regarding elegance; abandoning one’s perspicacity and letting go of one’s intelligence is removing oneself from active thoughts during meditation; and the Great Opening is the doorway which is revealed within meditation and which gives access to the Emptiness.

The practitioner should use the time devoted to meditation to relax, rest and recharge his energy. In the period preceding the practice, he relaxes the body and mind and begins the process of systematic forgetting, until forgetting himself. He abandons logical and imaginative reasonings, all memories and wanderings of the mind, worries and frustrations. In this state, he shall be resting as if on holiday, in his room. As all activities are suspended, he also frees himself of the limitations imposed by the norms and constant demands on the use of his intelligence. During meditation he need only give himself up to the naturalness, to be at one with the Great Opening.

When preparing to meditate, the practitioner forgets appearances. He is not worried about his hair, whether it’s nice and tidy or not, or about his beard, whether it’s trimmed or in need of a shave. He is not worried about the spot on his face, or about how his clothes look: whether they are fashionable, attractive or ugly – he is only concerned about the comfort that the clothes need to provide. At that point, he puts himself at ease and gradually ceases to fulfil the norms, in order to fulfil the demands of his body, while seeking the position he considers comfortable, until he attains a state of tranquillity and enters meditation, at which time all the rules and the use of intelligence are forgotten. When alone in the room, with the door closed, sat comfortably to begin the meditation, the practitioner need not follow norms, nor activate his intelligence. Here there is no dispute or discussion; there are no challenges to be answered. Therefore, there is no need to prepare for clashes. The person only needs, at this moment, to let go of rationality and relax the body and mind so as to enter meditation.

If the practitioner is dedicated and disciplined, he will advance, until reaching the state of Primordial Chaos and feel as if a door has opened within him, through which he shall pass to enter the Emptiness. This is the Great Opening, the apex of the Daoist Spiritual Path: the consciousness expands to the infinite, all limits are broken, norms and logical reasonings cease to exist as impositions and all forms, images and languages are forgotten. But the creative potential remains present because the practitioner has not ceased to be conscious, he has simply become serene. And what was manifest has been transformed into potential.

Wu Jyh Cherng (1958-2004), was a Taoist High Priest and Master of Meditation, Rites and Ceremonies. He was ordained as a priest by the World Central Committee of Taoism based in Taiwan and in 1991 he founded the Taoist Society of Brazil. Master Cherng spread the Taoist doctrine of the Orthodox Unitary Order and passed on his knowledge of this Tradition to his disciples and followers.